NANOWRIMO Approaches... Are You Ready? 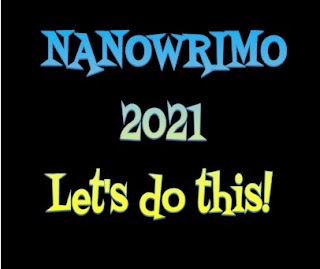 I guess it comes down to a plotter or a pantser or even a just give me an idea!

Seriously, Ideas pop into my head all the time. I'm constantly writing scenes in my head that might never make it onto the keyboard.

I think it was the World According to Garp where he sees the red gloves in the gutter and a story pops into his head? Correct me if I'm wrong, it's been awhile.

That's where I think the stories hide. In those everyday things all around us. Stephen King says in his book, On Writing that he just puts too ideas together. Like for Carrie; Telekinesis and a girl who gets picked on in school. Easy, right? Rapid dog and mom trapped in a car with her son. Writer has accident and meets crazed fan.

So for this year's NANO I'm going to take King's idea and merge two things together. I'm starting a list;

Housewife and the devil meet

Vacation on an island and contact is lost from the mainland

Man gets job in restaurant Owner is a ghost

Woman is murdered and haunts her murderer

Woman buys a bracelet at a garage sale and can suddenly hear voices.

So where are you going with NANO this year?

NANOWRIMO Approaches... Are You Ready?

Love this time of year when we prep for NANO.  What? you don't prep for NANO?  I guess it comes down to a plotter or a pantser or even ...

Aimlesswriter
Rambling writings of an Indie Author wandering the world in search of the next story. Love to read, love to write!

jeanniewrites
Fiverr
Seller
I am an Indy author and published short story writer, pursuing a degree in English/Creative Writing. I've been published in both fiction and non-fiction.